And here are the final images! Just in case any of you were wondering, this is what the bricks and mortar shop looks like. Get ready for a guided tour!

We share our space at Of Cabbages & Kings with Knit with attitude, specialists in eco-friendly and fairtrade yarn, hence all the beautiful brightly coloured wool to the right.

This is our workshop area to the back or the shop. We hold all sorts of beginner and intermediate classes. Check out the website for details: Workshops

This is another photo of the crocheted granny square counter that Maya and I spent so many hours constructing. Our ‘floating box’.

Things are all a bit topsy turvy today as we’ve employed local photographer Leah Band to come and take some professional pics of the shop. We’ve finally finished the crochet for the counter so now seemed like the right time for the job. It’s little strange as the lights are off (I hope no-one thinks we’re closed!). Here are a few photos of our lady in action.

Over the weekend we had some new jewellery designs by Alice Bosc arrive on our shelves. Alice’s geometric statement necklaces by designer Alice Bosc have taken from the patterns of Navajo folk art, so I thought I’d take a closer look at some Navajo Indian craft just to get a bit of background to the pieces.

The Navajo, the largest federally recognised tribe in The United States of America, are famed for their weaving. I stumbled across this short film of elderly Navajo Clara Sherman carding and spinning. She was one truly skilled lady!

A new exhibition went up in the shop over the weekend and I’m very excited to let you know all about it. There’s an element of the outside coming in here as there’s a few immediately recognisable local street scenes from the surrounding East End.

Marc has put together a series of Limited Edition Prints concentrating on the city’s decaying and unique architecture. They capture the singular beauty to be found in those neglected buildings that have fallen into disrepair as the living city of London continues to evolve around them.

“I had always set out to paint the city I knew and which is close to my heart. Avoiding the repetitiveness of London’s landmarks depicted in many paintings my aim was to capture an alternative view of the city. As much as I love the monumental buildings that create our skyline, it was the side streets and alleyways that seemed to hold a mystery for me.

I love the freedom of the city, getting lost in the crowds. It can be claustrophobic yet there’s also the feeling of loneliness and isolation. It’s these feelings that allow you to create your own world within the city.The atmosphere can change according to weather, season and the time of day, which makes it the perfect subject to paint. It can be the drama of sunlight hitting a window or the glow of a street lamp or chimney tops against an unsettling sky.

I began to explore the East London streets discovering something magical and new each time. I saw the street corners in a different light, almost appearing as cinematic compositions. I was able to visualise them from reality to canvas.”

As the face of London changes overnight, it’s apparent that these views of the city, the architecture of crumbling and faded grandeur are beginning to vanish before our eyes. Desolate buildings, with their peeling paint, numberless front doors, and glimpses into empty rooms through uncurtained windows invite contemplation – of the lives once lived here, and the new lives that continue to do so.

The Music Maker illustrates the facade of the famous Wilton’s Music Hall, an example of London’s decaying and unique architecture, beautiful and decorative buildings that appear desolate, living on amidst an ever-evolving city. The layers of paint applied to Wilton’s exterior over the years chime with the generations of Londoners ushered through her doors to enjoy music, variety and spectacle. Even if you’ve ever passed the building you can imagine the revelry and cabaret emanating from within. Though paint may fade, Wilton’s Music Hall remains one of the most colourful places in the East End.

Marc’s prints are currently on display at Of Cabbages & Kings

It’s been a long time coming, but today we finally finished the counter. Hurray!!! A contemporary take on the good old granny square. We were aiming for a floating box effect and I think that’s what we’ve achieved. The colours are rather stone-like, however it’s incredibly soft to touch as it’s constructed from Ushya, which is a chunky merino wool. Also, as the wool is only temporarily fixed, we’re free to change the look as we wish.

A big thanks to both Knit with attitude and Finch Munro for both the design and build/crochet of the project. 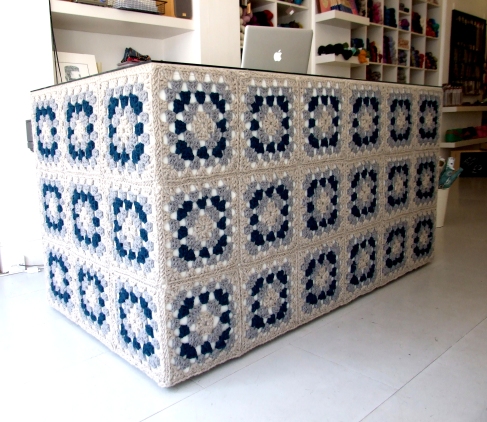 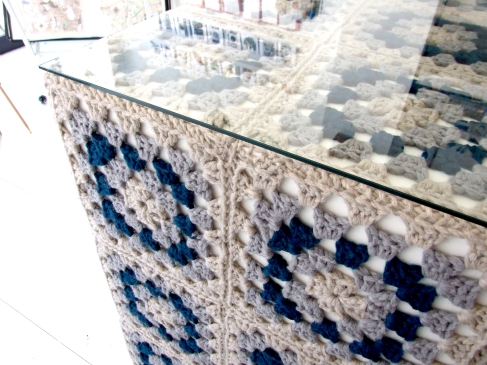 Go on a journey of self discovery with these absolutely incredible Titanium Quartz pendants.

Titanium Quartz, also known as Rainbow Aura Quartz, is the perfect stone for the mind. It is said to centre scattered emotions and aid clarity of thought, clearing unnecessary thoughts and helping you discover your life path.

We also tend to think that these pendants look a little bit like the far flung reaches of the universe. What better way to expand your horizons! 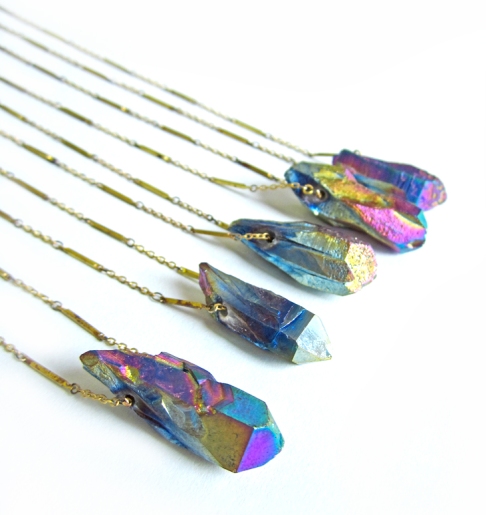