When we heard about the documentary Made You Look we just knew that we had to get involved. The film is primarily about printmaking and the digital age. The documentary interviews a number of established artists from across the UK about their work and how they view art and making in the middle of a digital revolution.

In our gallery and shop space we work with a number of artists who also print at Print Club London, a studio space that gives artists access to screenprinting equipment on a membership basis. Many of the artists in the film are also members of Print Club, which is located down the road from us in Dalston.

We have organized a screening of the film on Monday October 26, at 6:00pm, at the Hackney Picturehouse. There will be a Q&A afterwards with one of the co-directors, Anthony Peters, and producer David Waterson. You can purchase tickets through Ourscreen for the event. We need to sell a certain number of tickets before October 18 in order to have the screening go ahead, so please purchase your tickets soon or we’ll all miss out!

You can watch the trailer for the movie here.

The synopsis of the film is below.

The last 15 years has seen a boom in the UK graphic arts and illustration industry, with a DIY scene emerging and prospering alongside new and affordable leaps in technology.

So much of our lives is now spent in the virtual digital realm, so what will become of the tactile objects we all hold so dear? Will we see books disappear in our lifetime? And why are more and more creatives moving away from the computer and getting back to using their hands to create art, both commercially and for art’s sake.

Made You Look is a documentary which sets out to explore the landscape of the commercial arts in the 21st Century. It’s a film that gives an insight into how modern creative people feel about the challenges and triumphs of living in a hyper digital age.

This film is a rare and candid insight into the work of some of the UK’s top creative talent, including beautifully shot footage of artists at work and play in their own creative environments.

Anthony did a keynote talk at the Blogtacular conference in June, which they have just released for the public to watch. He talks about how he got the idea for the movie, some sneak peeks into the making of, and the importance of making.

We hope to see you at the screening! 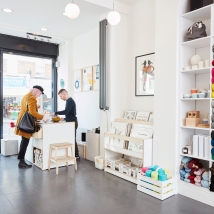